Fracking in the UK

REPORT RECOMMENDS FRACKING SHOULD BE CONTINUED IN THE UK

Fracking, or Hydraulic Fracturing, is a process by which water, sand and chemicals are forced into buried sediments in order to shock them into releasing trapped hydrocarbons, which can then be extracted for commercial use. This has proved highly controversial with environmentalists, who accuse the process of causing Earthquakes, polluting groundwater, and using large amounts of fresh water.
To date the UK has been host to only a single, experimental, fracking project, at Preese Hall near Blackpool in Lancashire. Operations were stopped at Preese Hall in 2011, after two small Earthquakes in April and May were connected to activities there. 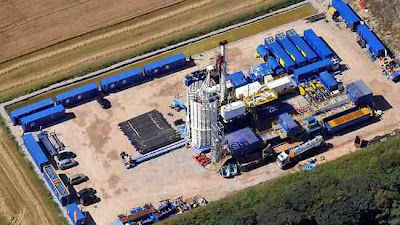 The Preese Hall well site in Lancashire. The Australian.
This week a report commissioned by the Department of Energy and Climate Change was published, entitled 'Preese Hall Shale Gas Fracturing: Review and Recommendations for Induced Seismic Mitigation'. This was written by Peter Styles of the Department of Geography, Geology and the Environment at Keele University, Brian Baptie of the British Geological Survey and Christopher Green, director of GFrac Technologies, and concludes that fracking should be allowed to continue in the UK, as long as certain conditions are met.
The team recognize that the Preese Hall operations were the most likely cause of the Lancashire Earthquakes, and that there was a high likelyhood of continued operations in the same area causing further quakes. In addition the report found that the quakes caused deformation in the structure of the well - deformation that could lead to chemicals used in the process leaking into other strata than the ones intended.
An earlier report in the US found that chemicals from a fracking operation there had entered aquifers, but was unable to say whether this was due to the process itself, or due to spillages at ground level. This was widely cited as vindication of the process, which is odd since clearing the fracking element of the operation could only be achieved by claiming blundering incompetence in another part of the process, but spin often seems to overtake logic in debates over fracking (and the energy industry in general).
Fracking undoubtably does cause Earthquakes. An Earthquake is shaking in the ground, a large truck driving past your house doesn't just feel like an Earthquake, it is an Earthquake. Blasting pressurized water and sand into buried rocks in the hope of causing them to fracture will definitely cause Earthquakes (if it didn't there wouldn't be any fracturing, and the process would not work). Unfortunately extraction companies involved in hydraulic fracturing employ lobbyists and press spokesmen who do not always appreciate this, and who may not be concerned too much if the truth gets slightly obscured in getting their side of the story across, leading to some confusion on this point.
What should be being discussed is the scale of Earthquakes that can be caused by fracking. Engineers in the industry have repeatedly estimated that the process should not be causing quakes greater than magmitude 1.0 on the Richter Scale, but several areas in the US where fracking operations are underway have suffered increases in seismic activity with quakes in excess of 3.0 being reported. The Richter Scale is logarithmic, so a magnitude 3.0 quake is 100 times as powerful as a 1.0 quake. Nobody has been able to explain how fracking could be causing quakes this much larger than predicted, leading the industry to claim that the increases are co-incidental, and that without a proposed mechanism they cannot be held responsible. In this light the UK report, which directly links fracking to two Earthquakes measuring 1.5 and 2.3 on the Richter Scale is a blow to the industry.
The report recommends that all hyrdraulic fractioning operations in the UK should be carefully monitored for seismic activity, at the operators expense, and any operation shown to have caused a quake in excess of 0.5 on the Richter Scale should be halted immediately. They furthermore note that it is highly unlikely that a fracking operation in the UK could ever cause a quake in excess of 3.0 on the Richter Scale, and that a quake on that scale could not cause any serious damage.
While this has widely been reported as a green-light for the fracking industry in the UK, it potentially places a considerable additional burden upon them, since the expense of installing seismic monitors would add significantly to the cost of the operation, and the possibility of being forced to close down at any point would make investing in any such operation highly risky (an industry that cannot explain how it causes larger quakes would probably be unable to prevent or predict this).
Environmental groups in the UK have expressed a great deal of concern at the report, even though it recommends tight regulation of the industry. This is not surprising, as the current UK government has a track record of friendliness towards the hydrocarbons industry (Business Secretary Vince Cable is a former oil-man), and of opposing environmental regulation of any sort. In addition Chancellor of the Exchequer George Osborne recently announced plans to encourage the building of gas-fired power stations in the UK, which suggests that fracking operations targeting natural gas are likely to be welcomed. In the light of this there is clearly a concern that the report could be used to justify resumption and expansion of fracking operations in the UK, without putting into place the recommended regulatory measures.
The operators of the Preese Hall site, Cuadrilla Resources, are certainly keen to resume operations. They estimate that the Lancashire field contains about 11.3 trillion m³ of natural gas; enough to power the UK for over 50 years. However the British Geological Survey estimate the field contains much less gas, 0.13 trillion m³, and that only 5-10% of this will be recoverable - enough to power the UK for 21 days. This big a disparity in estimates shows a surprising degree of optimism on the part of Cuadrilla Resourses, which if extended to other areas of the business would in themselves raise concerns about the companies safety and environmental policies.
In addition to the Lancashire field the company has obtained licenses for sites in Sussex, Kent and Surrey. There are thought to be reserves of shale gas suitable for extracting by fracking in Wales, Northern Ireland and Scotland as well as in England.
See also Protests against hydraulic fractionation across Bulgaria, Oklahoma shaken by Eathquake on Christmas Day, Earthquake in Texas attributed to fracking and Fracking linked to Earthquakes in Lancashire.
This article was written by Joe Bauwens and was first published in his popular Science Blog: 'Sciency Thoughts'.